Brian Sanyshyn holds a Bachelor’s Degree in Music Education from the Ithaca College School of Music where he studied trumpet with Mr. Frank Gabriel Campos and Dr. Kim Dunnick. Playing trumpet since the age of nine, Brian has performed in a large variety of settings including concert bands, symphony orchestras, big bands, jazz combos, brass quintets, brass choirs, trumpet ensembles, rock groups and musical theater. Brian served as the conductor for the Ithaca College trumpet ensemble during the 2013-2014 school year in preparation for their performance at the annual International Trumpet Guild conference. Brian currently teaches General Music at C.V. Starr Intermediate School in the Brewster Central School District, but he enjoys working with students of all ages. As the music director for the St. Lawrence O’Toole Theatre Department during the past three years Brian enjoyed working with students from kindergarten through 12th grade. Brian is a New York State Certified Teacher (K-12 Music ). 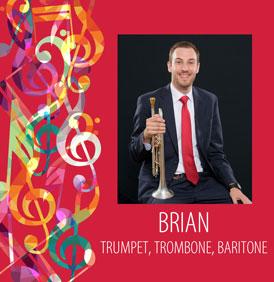 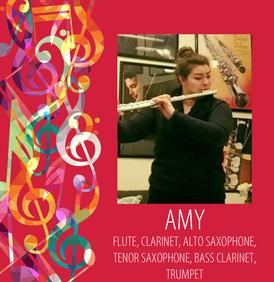 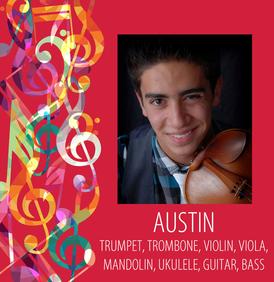 Rob Earhart is a trombone performance major at the Hartt School. An avid orchestral and chamber musician, he has performed with the Hartt, Nutmeg, Manchester, and Wesleyan University Symphony Orchestras, as well as the Crimson Quartet, Hot Stuff Brass Quintet and participated in the 2016 Atlantic Brass Quintet Seminar in Boston. He has studied with Haim Avitsur, John D. Rojak, Matthew Russo, and Andrew Malloy. He joined the faculty of Wesleyan University in 2017.

Amy Hannequin has been teaching woodwinds with Sharps and Flats since 2010. She graduated from the Mary Pappert School of Music at Duquesne University in Pittsburgh, Pennsylvania with a Bachelor of Science Degree in Music Education, with a concentration in flute studies. During her time in Pittsburgh, she worked for the Flute Academy of Pittsburgh, performing in the flute choirs, instructing the youth flute ensemble, and taught private lessons. With Duquesne University, Amy performed with the Duquesne University Flute Choirs where she guest conducted, the Symphony Band, Wind Ensemble, Jazz Workshop and Chamber Ensembles on flute, saxophone, and trumpet, the Pappert Women’s Chorale, and performances with the City Music Center Chamber Orchestra, Pittsburgh Flute Club, and the First Baptist Church of Pittsburgh, where she served as resident flutist.

Amy currently performs with the Danbury Community and Symphony Orchestras, Connecticut Master Chorale, and chamber ensembles in the Western Connecticut area including the Hat City Flute Choir. She also organizes and performs for weddings and other services.

Amy has been teaching public in Connecticut since graduating, and she serves as the chorus director and teaches digital music and instrumental classes for Bethel Middle School, in Bethel, CT. She has also held the position of Woodwind Director for the Bethel High School Marching Bands, including receiving first place for the US Bands National Championships for Class II. She also currently works for the Connecticut Music Educators Association having served as the State Judge Chair, member of the Student Affairs Commission, and Chair for the Elementary Honors Choir. In addition to teaching lessons and flute choir at Sharps and Flats, Amy also prepares students for festivals including preparing for CMEA Regions and All-State and NYSSMA Adjudication and Festivals. 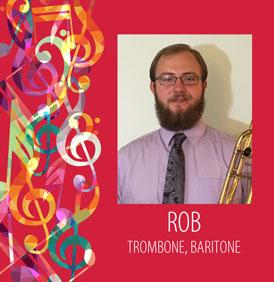